As part of our commitment to the residents of Falmouth, the Falmouth Police Department hosts a number of events throughout the year designed to educate, benefit and support those that we serve.

Events include the Citizens Police Academy, Police Open House, and National Night Out just to name a few.

Information about upcoming events will be posted on our website as details become available so that you can plan to attend and participate in these great events. 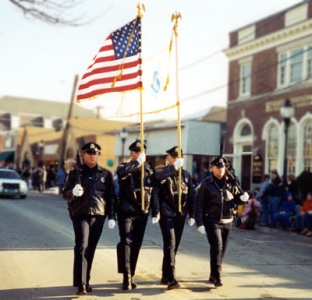 May
The Falmouth Police Department Memorial Service honors those who have died in the line of duty while serving as a Falmouth Police Officer.
View more details about the FPD Memorial

July
Voted one of the 10 best fireworks displays in the country by Travel and Leisure Magazine! Held each year at the Falmouth Heights beach, this is a classic Cape Cod summer event.
View details

August
The Falmouth Road Race is an annual 7.1-mile seaside road race that starts in the village of Woods Hole and finishes at Falmouth Heights Beach.
View details

December
The Falmouth Chamber of Commerce’s Annual Christmas Parade steps off at noontime at the intersection of Davis Straits and Dillingham Avenue. It proceeds down Davis Straits, along Main Street, and ends at the Village Green. The parade will feature theme decorated floats, marching bands, live animals, costumed characters, and Santa Claus!
Visit the Chamber's Calendar

Academy dates to be announced
A 10 week program during which participants learn about the daily operations of the police department, such as patrol functions, detective operations, E911 communication and dispatch, Special Response Team operations, and more. Students will have the opportunity to accompany a police officer on a ride along for a portion of a patrol shift.
Learn more